#hourforhaiyan closer than you think 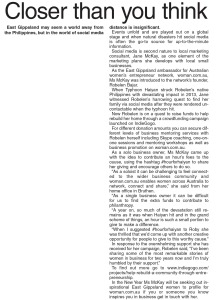 #hourforhaiyan closer than you think

East Gippsland may seem a world away from the Philippines but in the world of social media, distance is insignificant. Events unfold and are played out on a global stage and when natural disasters hit social media is often the go to source for up-to-the-minute information.

As the East Gippsland ambassador for Australian women’s entrepreneur network, woman.com.au, I was introduced to the network’s founder, Robelen Bajar. An inspirational woman who, in two short years, has built a thriving women’s networking community for entrepreneurs, bloggers, creatives and freelancers across Australia.

When Typhoon Haiyan struck Robelen’s native Philippines with devastating impact in 2013, I witnessed Robelen’s harrowing quest to find her family via social media after they were rendered uncontactable when the typhoon hit.

Now Robelen is on a quest to raise funds to help rebuild her home through a crowdfunding campaign launched on IndieGogo.

For different donation amounts you can secure different levels of business mentoring services with Robelen herself including Skype coaching, one-on-one sessions and mentoring workshops as well as business promotion on woman.com.au.

As a solo business owner, I came up with the idea to contribute an hour’s fees to the cause, using the hashtag #hourforhaiyan to share my own giving and encourage others to do so.

As a soloist it can be challenging to feel connected to the wider business community and woman.com.au enables women across Australia to network, connect and share.

A year on so much of the devastation still remains as it was when Haiyan hit and in the grand scheme of things, an hour such a small portion to give to make a difference.

When I suggested #hourforhaiyan to Roby she was thrilled that we’d come up with another creative opportunity for people to give to this worthy cause.

In response to the overwhelming support she has received for her campaign, Robelen said, “I’ve been sharing some of the most remarkable stories of women in business for two years now and I’m truly humbled by their support.”

To find out more go to www.indiegogo.com/projects/help-rebuild-a-community-through-entrepreneurship.

In the new year I will be seeking out inspirational East Gippsland women to profile for woman.com.au if you or someone you know inspires you in business contact me via email jane@janemckaycommunications.com.au or call 0404 836 396.

— A version of this article was published in the East Gippsland News on Wednesday December 10 2014.

Is Your Brand a Hero or a Zero? Find Out With This Quick Quiz!